Sandhill Cranes winter in the Southwest. There is a wonderful nature preserve called Whitewater Draw just about 100 miles from our home. Chris Clark, married to my niece, Tryn, and he and their daughter Tryn Rose Seley, went with me for a visit early in January to see the cranes. There were patches of snow on the ground and the nature trails were wet and deeply muddy. We arrived at the time when the Cranes were due back from their morning grazing. A beautiful flock of Snow Geese entertained us in their complex flight formation, and numerous water fowl, and other birds were there for us to enjoy, but no cranes. 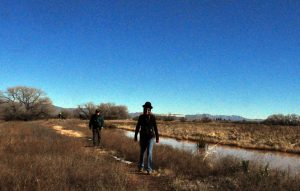 Not a bird in the sky

We would have stayed longer, but the deep mud kept accumulating on our shoes so that we gained a few inches in height and several pounds in weight as we trudged our way along the path. Gradually the waiting crowd thinned out until we were some of the few people left. 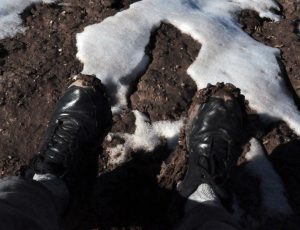 After two hours, we finally set off for home, wanting to get back to Tucson by 3:30pm. Not two miles down the road, we saw flocks of cranes, still miles away, making their way back to the preserve. We enjoyed seeing them from afar, and will have to return another time to witness the spectacle of them circling the ponds, calling to each other, and coming in to land. 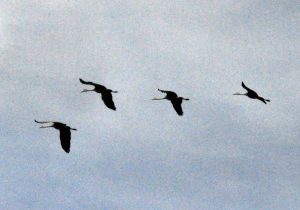 My next book will soon be ready for the press. Catalina Mountains: A guide book with original paintings. In it I mention a little waterfall which I have dubbed Hidden Falls, because of the way much of the cascade is blocked from view by a projecting rock. I thought it was about twenty feet tall, but needed to check. It turned out that when my friend, Dave, puts his walking stick up against the bottom of his nose, the top marks ten feet. With the enclosed picture we calculated that the drop is just under sixteen feet. Now, I think, we may be ready to go to press. 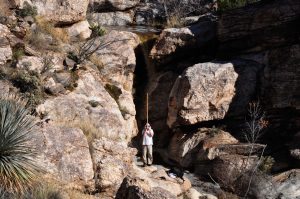