Last Saturday my niece, Marjorie and I went to the Mission Gardens in Tucson (at the Base of “A” Mountain) to witness the celebration of Saint Ysidro. The Tucson Herbalist Collective, of which she is a member, had a booth there. 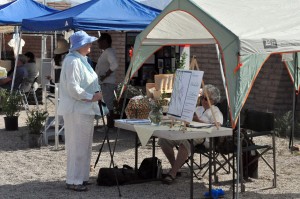 Marjorie at the Booth with Pam Nakai

It was great fun seeing the young musicians of the Davis Bilingual School with their Mariachi Band, and the procession of people of different ethnic groups. San Ysidro was famous as a Labrador (Farmer) who enriched the plant offerings that helped to support the population. 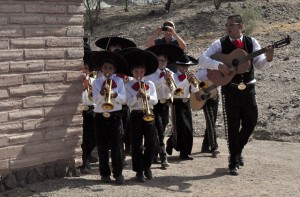 The Mariachi Band coming around the corner into the Garden 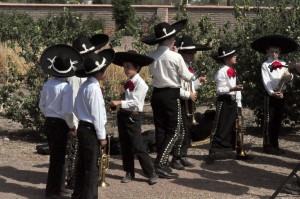 The musicians relaxing before their next song

At the end of the celebration I caught this picture of some women harvesting in the fields of the San Agustin Mission Garden. 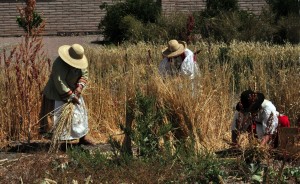 Wednesday Ed and I had a beautiful hike along Turkey Run. It was a cool day, and though there were not many different species in bloom, some of them, like the wild strawberry, carpeted large sections of the forest floor. The botanical name “Fragaria” is related to our word fragrant.  I tried to smell the flowers, but couldn’t detect any particular odor. The references is to the wonderful smell of the strawberries themselves, which we rarely see in the wild since they are snatched up eagerly by the wildlife.

The False Solomon’s Seal and Star Solomon’s Seal were just coming into bloom. Their botanical genus, Maianthemum, means “May flower”, so this is their month., 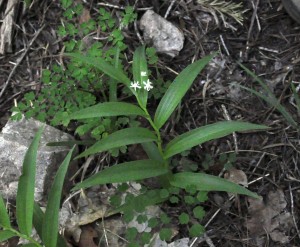 On the way down the mountain Ed and I were intrigued by the cloud formations. The first was pretty well shaped like a box. The cloud itself stayed very much in the same place for a long time, but its shape was constantly changing. On getting home I found that it was a Lenticular Cloud  (Altocumulus lenticularis), one of the Altocumulus cloud formations. As we drove down the mountain, looking toward the East we saw banks of cumulus clouds (about 3 kilometer altitude). To the right were many examples of lenticular clouds, about twice as high off the ground. These clouds form in areas where the wind currents are in standing waves, so they are held in the same place for a long time. At times we had trouble keeping our eyes on the road because of the fascination of these amazing clouds. 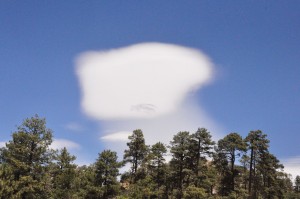 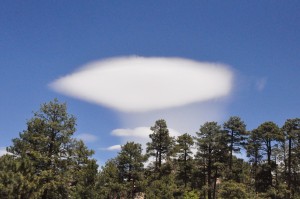 In a few minutes the same cloud became an oval 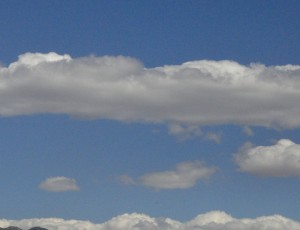 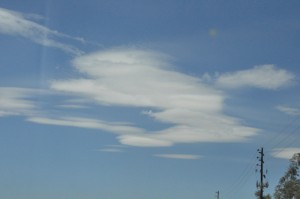 A group of lenticular clouds

Last week a group of us were having lunch after a nature walk. Many of the people in the group were keen bird watchers, so you can imagine their astonishment when they heard the call of an owl in the middle of the day. One woman wanted to see the owl, so she went to investigate. Minutes later she returned, a little bit deflated. “It wasn’t an owl” she explained, “just another bird watcher making owl sounds.” I found out later that some little birds will gang up on an owl to drive it away. By making owl sounds the person was trying to trick some of these little fellows into emerging from the shrubs. I don’t know if he (or she) fooled the little birds. It fooled us.

Today we saw a few birds but I was more interested in getting a close up view of two plants I have known for some time – Bear Grass and False Indigo. 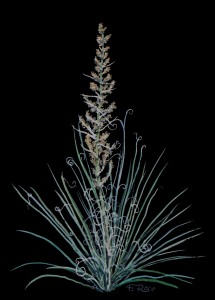 Bear Grass (Nolina microcarpa) is not a grass at all, but a very large plant in the Asparagus family. In May the plants send up a flowering shoot, four feet or more tall. The species is dioecious, meaning that male and female flowers are on separate plants. Whereas the flowering stalk is huge, the flowers are quite small, and we were having some difficulty telling which was the male and which the female. Eventually we found some with tiny little flowers clustered on the long stalk. I was able to get a close up of the flowers, and finally can tell the two apart.

This is a watercolor portrait I did of Bear Grass 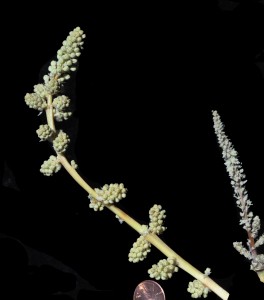 The stalk on the left has the male flowers, not yet opened

On the right is the female, with some flowers open and many closed

The penny gives an idea of scale 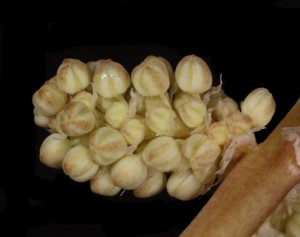 The male flowers before they open 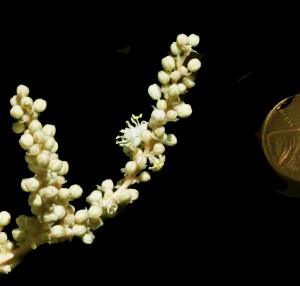 Here is a cluster of male flowers, with just one of them open 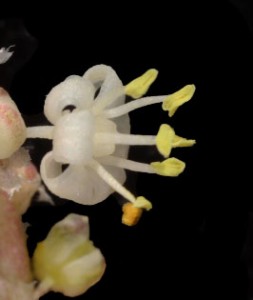 The male flower close up. Note the golden anthers 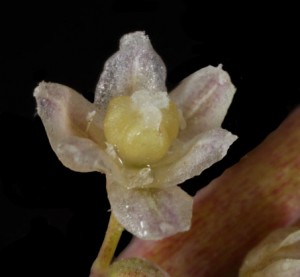 Later we came across a clusters of False Indigo plants – Amorpha fruticosa. From a distance it is hard to tell if the plant is in bloom or not. Up close, you can see the flower stalks, with the bright yellow anthers emerging from a deep purple base. I had never been able to photograph the individual flowers before today. I was thrilled to see what they look like. The genus name, amorphous, means “deformed” referring to the fact that each flower doesn’t have the usual form with a number of petals. It just has a single one curled around, with the anthers protruding from it. 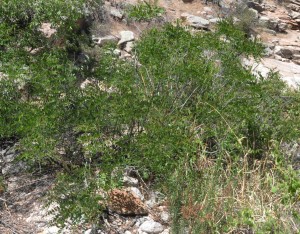 A general view of False Indigo plants in a stream bed 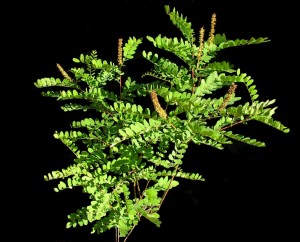 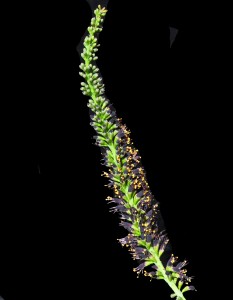 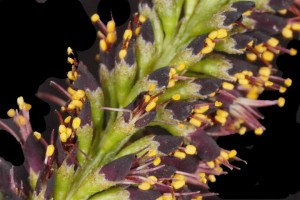 Here we see the individual flowers packed in. The yellow balls are the pollen bearing anthers. The flower petals are purple 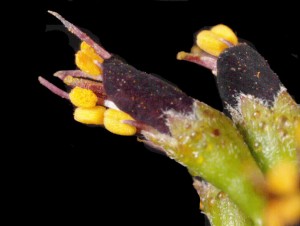 A close up of two False Indigo flowers

On the home front, I have been watching the golden barrel cactus in our front yard. A few months ago I noticed that one of them was looking a little sickly. On closer inspection I found that I could see right through it in places. Our property is home to many ground squirrels, and I think they found a way of getting to the fleshy interior of the cactus. On the outside, the plants are well defended. Coming from underground, the ground squirrels found the soft underbelly, and have almost completely hollowed the plant out. They did the same to one of the other two. And yet all three cactus plants are still alive! They are gutted, but not totally defeated. 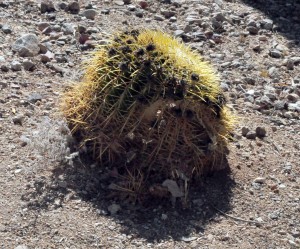 Our Golden Barrel cactus with holes in the middle where you can see right through the plant. Looking at the plant and moving your head around, you can see that it is almost completely hollow, and yet is still alive

It was cold and blustery today. Ed and I tried hiking high in the mountains but it was too cold for comfort. As we drove down to a lower (and therefore warmer) place, we noticed a Cliff rose (Purshia stansburiana) blooming along the side of the road. We parked and went to get a closer look. That is when we noticed this Silverleaf oak (Quercus hypoleucoides). The male catkins on Oak trees are yellowish brown, and usually not particularly visible. This tree was festooned with them. 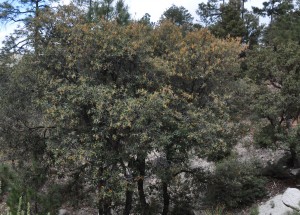 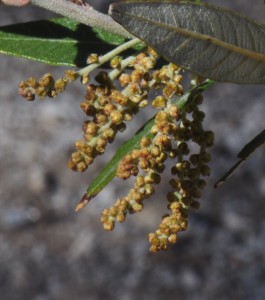 A close up look at the Silverleaf oak catkins

In a fairly short walk in Molino Basin we saw about three dozen flowering plants. We were particularly interested in a little succulent known as Graptopetalum (Graptopetalum rusbyi). It has been very dry, and we wondered if it would be in bloom. When we arrived at the stream bed where we have seen them before we noticed that there seemed to be fewer plants than usual, and the leaves were shriveled up. But the blooms were perfect, such a treat to see. 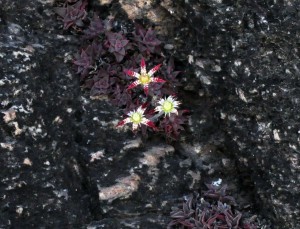 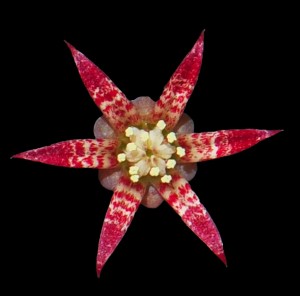 For years I have been wanting to see the Ironwood tree (Olneya tesota)  in bloom. It normally grows in lower elevations than Tucson since it is highly susceptible to cold. Recently I was told of a group of four trees less than a mile from our home. Today I walked there, and found all of the trees in full and glorious bloom. This remarkable tree has some of the heaviest wood known. The flowers look something like sweet peas, white tinged with pink. I was delighted to get pictures at last. 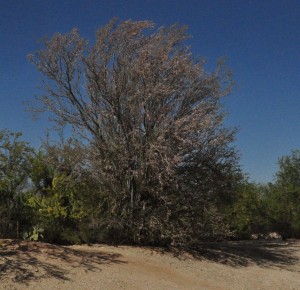 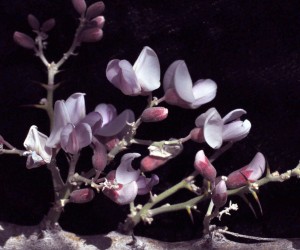 A cluster of Ironwood flowers 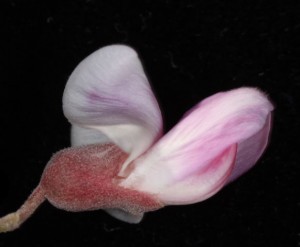