For my 91st birthday my wife, Louise, gave me a megaphone. This is not because I am losing my voice or that she is going deaf, but so that more people on my plant walks can hear me dispensing wisdom. I don’t know that it makes much difference, but we do get a laugh out of it. 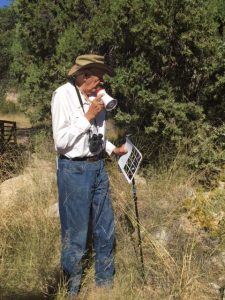 This last walk had at least 24 people on it (I did not do an exact count), and we had a very pleasant morning in the Gordon Hirabayashi camp ground in the Catalina mountains. I got excited about seeing the tiny flowers featured in my new book, such as:
Button Weed – Diodia teres. 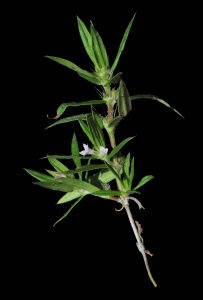 Another was Rattle box – Crotalaria pumila. One of our walkers pointed out that this name comes from the Genus, Crotalus, which includes the rattlesnakes. When the seeds in the pod are dry, you can hear the rattle when the wind blows. Although I had not seen it when Ed and I went out to explore the area and make a plant list, 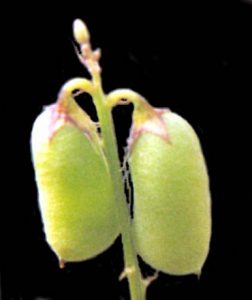 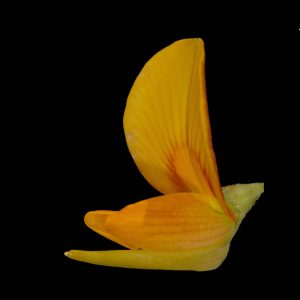 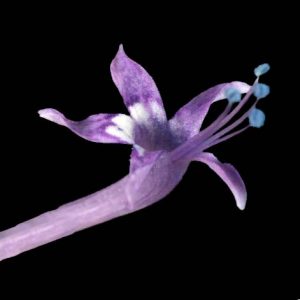 Next Friday, October 5, I will be giving a short talk about “Small Wonders” at a book signing at Sunrise Chapel, 8421 E. Wrightstown Rd, in Tucson. There will be other authors, and a display of art work. You are all invited. It begins at 6:30 pm.

In the process of writing “Mountain Wildflowers” I came across a number of plants with very small flowers. I called them “invisible” since most people, including myself, would pass by and not even see them. The idea expanded to include clusters, where the individual flowers are rarely seen. I then looked at composite flowers, whose name suggests that what looks like a single flower is actually composed of many much smaller ones. Then there were those little beauties that are small, but still visible and definitely worth a closer look.

This blog has been silent for quite a while. My somewhat feeble excuse is that I was working on four new books, which is partly true. Anyway, this week I got my first shipment of my new book: “Small Wonders.” Here is a picture of the cover, designed by Owen Rose, and a sample page. 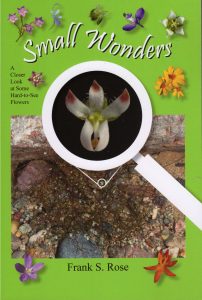 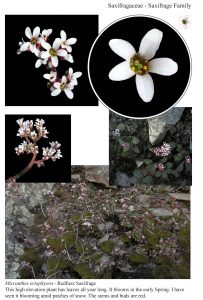 Thanks to my super macro camera, I can now take pictures of items that are smaller than a quarter of an inch.

There are over 200 species in this book. In most cases I have a life-sized picture of the flower in the upper corner, right near the enlarged version, as you fan see in the sample page.

The other three books in the assembly line are: 1 – An illustrated guide to the Santa Catalina Mountains, 2 – Glorious Grasses, 3 – Choose Joy –  Fifty-two Tasks on Spiritual Growth.