On recent plant walks I have found a number of interesting items. On the 26th of February Ed and I were in Catalina State Park and came across a Prickly Pear, growing out of the trunk of a Mesquite tree. I have seen Prickly Pear growing eight feet high on a Saguaro but this was the first time to see one on a Mesquite. 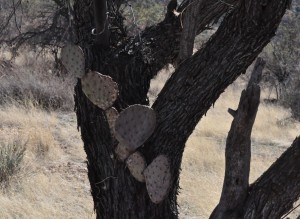 On March the sixth, I drove alone up the Catalina mountains to the Butterfly trail head. It was surprisingly mild considering I was at about 8000′. I was looking for grasses in bloom, and found some, but was not able to identify them yet. On the way I almost tripped over a “witch’s broom.” This is a condition in which the growth pattern of a tree changes so that the branches and needles are much more thickly concentrated forming a kind of basket shape.  I took two pictures – one on the ground, and the other propped on a tree stump. Reading about it I learned that trees have growth hormones. Some control the way the plant sends out new branches and some inhibit growth. When the hormones get mixed up the tree forms these very irregular masses of branches, twigs and needles that are considerably heavier than normal growth. In this picture you can see a central branch – so small as to be a twig really, that was supporting this mass. Evidently it broke, and the “basket” came tumbling down. I believe it came off of a Douglas fir. 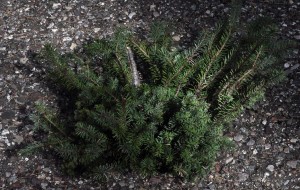 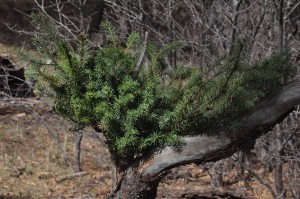 Proceeding along the trail I looked for one of my favorite flowers, the Redfuzz saxifrage. There were still patches of snow on the ground. I learned before that the plant will actually melt enough snow to poke through snow. On this walk I found a few plants with their red buds. By now the buds have opened to reveal these delightful white flowers, harbingers of spring in the mountains. 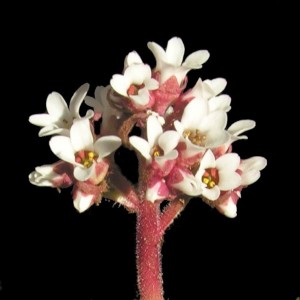 Picture taken a few years ago.

Kayla decided to spend her spring break with her grandparents in Tucson, getting away from one of the harshest winters on record in deKalb, Illinois where she is completing her last year of college at Northern Illinois University. She loved the warmth and sunshine, and hiked with us in Molino Basin. On part of her visit the three of us, my wife, Louise, Kayla and I went for a trip to Sedona. On arrival at the visitors center we were told about a trail to the iconic Red Rock Crossing that we had never been on before. We thoroughly enjoyed the walk. At our farthest point we stood at the edge of the fast-flowing Oak Creek. Later we visited the fascinating shops in Tlaquepaque and then drove up Airport Hill to catch the sunset. Hundreds of other people had the same idea. There was something really nice about seeing so many people gathered, hugging each other in the chill evening air, just to watch the sunset.
Before leaving Sedona the next day we hiked in the West Fork trail. On getting home I was inspired to write this little poem about our final walk.

A POEM OF GRATITUDE

The sky overhead is striped with long curving lines of ice crystals
The ground underfoot is red and soft
A cluster of acorn woodpeckers plays tag darting back and forth between the bare apple trees
The air is soft and cool as groups of people make their way up the canyon.

We cross and re-cross the stream tracking damp footprints up the banks of red earth
It is early spring – the bare branches of red osier dogwood give a warm glow to the forest, especially where sunlight touches them
White Candytuft start to appear as we make our way up the canyon first a few – then a cluster, then a celebration.
There are a few yellow mustard plants just showing their colors
We see a thicket of ancient horsetail the great survivors of earlier times

Happy people greet us, including the couple that spoke to us as we waited to get seated at the restaurant last night.
Lively teens and wobbling infants add to the pageant of human life visiting this treasured part of Oak Creek.

We turn around just before stream crossing number 5 (out of 13) and soon are treated to new flowers
The pink Valerian we missed on the way up the canyon, now reminding us how easy it is to overlook nature’s treasures

We complete our timeless interlude to begin the long drive home. 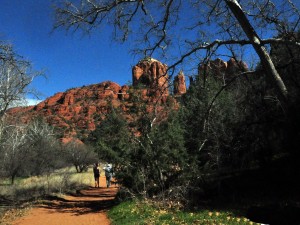 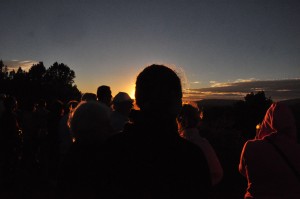 People gathered to watch the sunset in Sedona 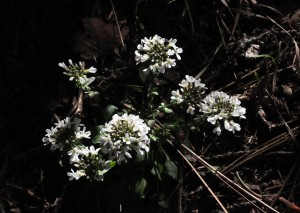 When I wrote my last blog I thought that the next big event for me was the Tucson Festival of Books. That will happen this coming week end. In the meanwhile, two other big events have intervened.

ONE
Jim Avramis sent an e-mail on Friday inviting me to be a co-leader of a hike the very next day. It turned out that I was free, and had even been thinking of going on the hike which had been advertised long ago. It was to Ironwood National Monument where I gave a talk last November 16.
About 60 people gathered in the parking lot at Marana Airport as Lahsha Brown welcomed us and gave us our marching orders. There were three hiking groups. Mine was led by Jim Avramis, and Gary Borax. I was there to share some knowledge of the plants of the region.
We car pooled to the Monument, ending up traveling along narrow lanes lined with thorny shrubs and trees scraping the sides of the vehicle  “Desert pin-striping it” as one hiker said.

We parked on the flanks of the mountain range and made our way up the slope to the saddle between Ragged Top and Walcott peak. Ragged Top has a distinct jagged outline, and is home to a herd of big-horn sheep. It was lambing time for the sheep, so we were told to avoid Ragged Top, and circumnavigate Walcott peak. Eighteen of us made the three-mile journey, crossing washes, making our way up the slope to the saddle, and going around the mountain back to the cars. We noticed thousands of  tiny wild-flower seedlings too small to recognize. Then we saw poppies, heliotrope, brittlebush, and other flowers. I met, for the first time, Chuparosa (Justicia Californica), a beautiful plant with red tubular flowers, also called Hummingbird bush and beloperone. It was a gorgeous day, and there was much to enjoy.
Getting back to our starting point at the airfield, I handed out my flower posters, apologizing for the fact that I did not have enough for all of the people in our party.

TWO
The other big event was a trip to Sedona with my wife, Louise, and granddaughter, Kayla. More about that next blog. 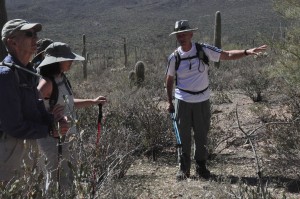 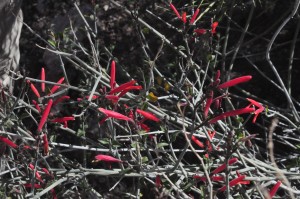 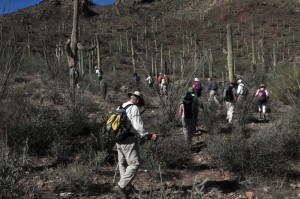 Making our way to Walcott saddle 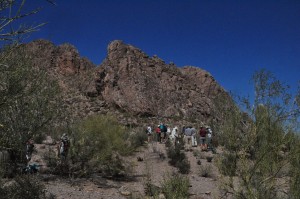 Some of our group at the base of Walcott peak

I recently visited Desert Survivors Nursery (1020 W. Starr Pass in Tucson) where Jim Verrier is Nursery Director. He is the brave soul who invited me to work on a book of grasses with him. When I got there he pointed out Bamboo Muhly (Muhlenbergia dumosa).  I was able to photograph the whole plant (it is quite large), and then zoom in on it to show more details as in these photographs. Two days later he and I did a plant walk in Sabino Canyon. Recent rain has brought a new crop of seedlings, and we saw about a dozen grasses coming into flower. 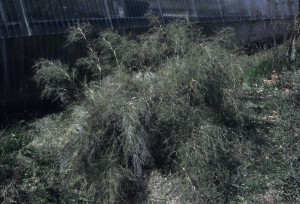 A clump of Bamboo Muhly at Desert Survivors Nursery 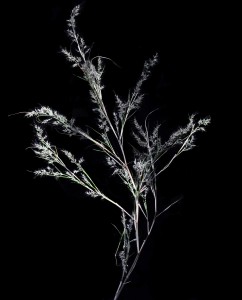 A branch of Bamboo Muhly

Zooming in to see more detail 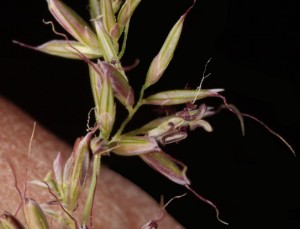 The pink is my finger. There are flowers in this picture. Can you spot them?

We also walked along Sabino Creek with the water rushing by and nurturing all kinds of interesting aquatic plants. 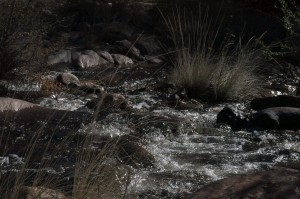 Sabino Creek with a clump of Deer grass (Muhlenbergia rigens)

On the way back we saw some Natal grass (Melinis repens) that I have photographed before, but this time I was able to get an especially good close-up of the flowers. 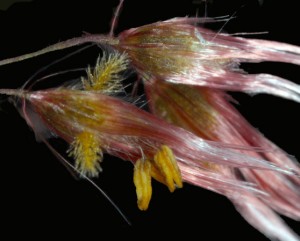 Natal grass flowers. The feathery ones are female, and the two yellow ones are male.

Two nights ago our son, Owen, and I were guest speakers at the Friends of Western Art meeting. Owen began with a humorous and challenging talk about how watercolors are better than oils. The fact that we were in a room richly equipped with excellent oil paintings made his remarks seem especially daring. I talked about how I got into painting and, much later, into nature photography. Our talks seemed to have been very well received and we thoroughly enjoyed the company of friends new and old.

The next big event for me is the Tucson Festival of Books where I will be spending time in four different booths. Since we had a good rain a few days ago there will be new life to enjoy in the Catalina Mountains.