It has been almost three months since we had rain in the Tucson valley, and there is no rain in the seven-day forecast. A couple of weeks ago snow fell in the Catalina Mountains, and my friend and I took a brief walk in the snow to say we did but it did not rain in our part of the valley.

The summer rains, called the monsoons, are now given official starting and ending points – June 15 to September 30. I looked in my personal rain log, and saw that we had no rain at all in the month of June 2017. July was good, with 11 days of precipitation. There were five more in August, and just three very light rainfalls in September. The last was September 9. Between then and the end of the calendar year we had only one rain fall that was more than a tenth of an inch (December 17). This lack of winter rain meant that we had very few Spring flowers in 2018.

It is no surprise, then, that on recent walks, the ground seems incurably dry. And yet there are flowers, and some of them look as healthy as I have ever seen them. It is just that there are not as many as usual. The air is clean, the gentle breeze refreshing, and it feels good just to be alive in these pine forests. Here are some that we saw in flower. 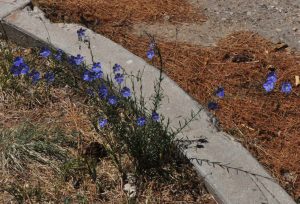 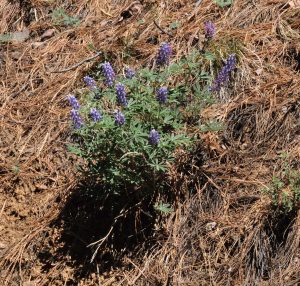 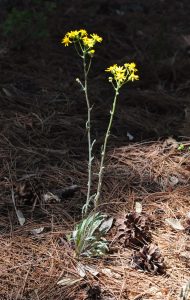 The Tucson valley is getting hotter every day. Time to go up into the mountains.
Steve and I drove to Bear Wallow where it is thirty degrees cooler and the heavily wooded forest provides ample shade. Soon we were making our way up an unmarked trail, enjoying a gentle breeze and a deep feeling of peace.

We were not expecting any flowers. It has been much too dry, and too long sing significant rain. Even so we saw a patch of Wooton Ragwort (Senecio wootonii) with bright yellow flowers.  Then I noticed tiny patches of white in a shady area by the trail. I looked more closely and saw the dainty orchids known as Spring Coralroot (Corallorhiza wisteriana). This diminutive plant is the first of the three Coralroot orchids to bloom every year, hence the name. The roots are indeed shaped like coral, and there is no green, since these plants do not produce any food themselves. Their roots are linked with fungus which in turn connects with the roots of trees. The plant has no leaves, just a thin red stalk with a cluster of flowers at the top each one facing outward, and each with a white lip. We saw about a dozen of these in our half-mile trek up the mountain. I wanted to find one in full sunlight. It was not until we got to our turn-around point and sat down on a log that we noticed one just a few feet in front of us. Later in the year the spotted and striped coral roots will start their blooming season.

Steve was ahead of me on the trail, and was impressed with the trunk of a huge tree. We could hardly see its top. Fortunately the trail switched back so that we were looking at the middle of the tree. Above it split into a Y shape, which is unusual for a conifer. We calculated that it must be a hundred feet tall, which is only about a third the height of the great Sequoias, but even so this tree, the Douglas Fir, is the Giant species in Arizona.

As we drove down the mountain Steve commented that in these few hours we had the feeling of having been on a refreshing vacation.