It has been a glorious fall in the Catalina mountains. I had a walk with Ed, during which we came across an animal that looked, at first, to be a snake with its tail cut off. Then we saw the four legs, and knew it was a lizard. I had not seen one with the same markings before. There are many varieties of lizards in Southern Arizona (there are about 6000 in the whole world), and we were not sure what this one was. It had lost about half of its body length but evidently was surviving well in the leaf litter. It looks like it could be a Madrean Alligator Lizard (Elgaria kingii). 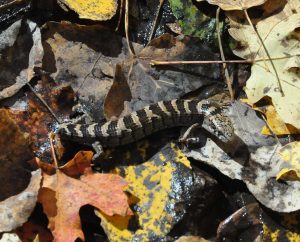 Ed and I enjoyed the fall colors immensely. Two days later my niece, Marjorie, and I drove up the mountain to take in the special beauty of this season. We stopped first in Bear Wallow to see the colors there. Then we proceeded to the parking lot of the Ski area. We were enchanted by the Aspen trees in full color. I usually think of Aspen leaves as all turning yellow in the fall, unlike the big Tooth maples that come in a variety of colors. It did not take long poking through the litter on the ground, to find that just as there are no two snow flakes alike, it seems that no two aspen leaves are alike either. This little sample shows just five leaves. Note the color and shape differences. We were particularly struck by those that were deep red. From a distance, the combination of the usual yellow and the occasional red, makes the overall effect orange. Had we stayed to explore this more, we think we would have found many more colors and shapes. 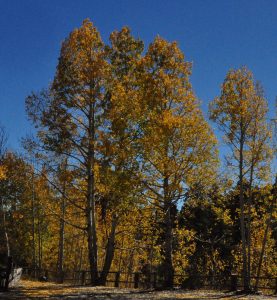 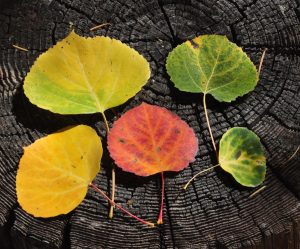 Coming down the mountain we pulled off to see one of Marjorie’s favorite areas. It is in a pine forest, with interesting rock formations. The low area had lots of desert marigold (Tagetes lemmoni) in full and glorious bloom. Then I came upon a circle of stones – perhaps a camp fire – with a plant growing through the rocks. Its leaves looked very much out of place. Marjorie said that they could be Nasturtium, a popular bedding plant. This is the first time we had seen this plant growing in the mountains. Nasturtiums (Genus Tropaeolum), are native to Central and south America. Watercress is called: Nasturtium officinale, but the plants are totally different. It seems that watercress and nasturtium produce a similar oil. The name Nasturtium comes from roots meaning “nose distorting”. I imagine that Nasturtium and Watercress smell about the same. 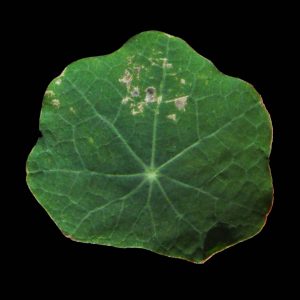 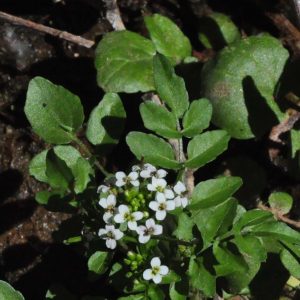 The single leaf, we think, is Nasturtium. The picture below it is of watercress.
Every trip up the mountain brings sights worth enjoying. There are not many flowers blooming in October, but parts of the mountain are ablaze in color.

Recently I was exploring the area south of the Santa Rita mountains with my friend, Jim. We were particularly interested in grasses, but kept coming across other plants of interest, including this one with the yellow flowers (Melampodium). When I processed the picture I noticed what seemed to be a yellow flower right at the base of the stem. Then I zoomed in and found it was a spider! I believe it is a Goldenrod Crab Spider (Misumena vatia). Years ago I was processing a picture of a Bouvardia plant, and found one tucked in among the red tubular flowers. It seems that this particular spider does not make a web. Its color enables it to perch unseen on a yellow flower and just wait for insects to land on it. Maybe this one was trying out a red one to see if that would also do the trick. These spiders also come in white, and can change color to match the flowers they visit. 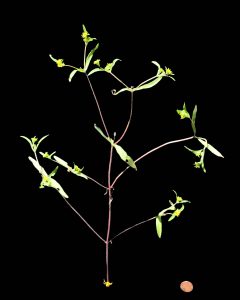 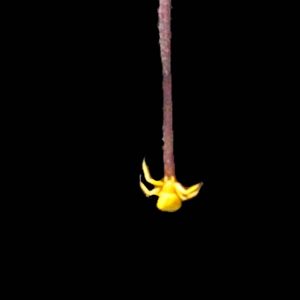 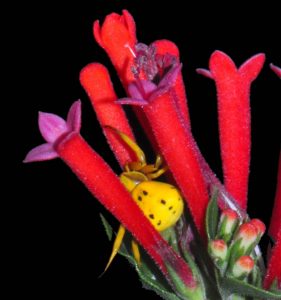 Recently my old friend, Virginia Ames, published her charming book: Bo and the Fly-Away Kite. She is old in two senses. I have known her for many years, first meting her in 1982 – 34 years ago. Now she is 102. And this is her first children’s book which I was honored to illustrate for her. She is an accomplished water-color artist herself, but chose to have me do the illustrations. It is unique in having the text in three languages, since the story includes three boys – English speaking, Spanish speaking, and O’odham speaking. Here is the link on Amazon.com.