Since I have taken an interest in “invisible flowers” it made sense for me to go to go to a talk called: “Desert mistletoe: A misunderstood, but beneficial native plant” given by Kelsey Yule. This was presented to the Tucson Chapter of the Arizona Native Plant Society. The following Saturday Kelsey lead a walk to look at these fascinating plants. She talked about their life cycle, and how their sticky fruits are sometimes stuck on the branches of a desert tree, maybe by a bird. For a while we wondered where our leader had gone, and then she came back with a short stick of wood. On it there was a tiny lump. We had to get out our loupes to see what it was like. Fortunately my camera has good close-up power, so I was able to get a photograph. In it you see the grey lump of the seed, and a tiny red tube arching up and down into the branch. She explained that the tube was a haustorium, which is like a root, but is different enough to have its own name. She said it would take five years before the plant developed to the point where it could grow and produce flowers and fruit. She also explained that the fruit is edible, but so far I have not dared to taste one. 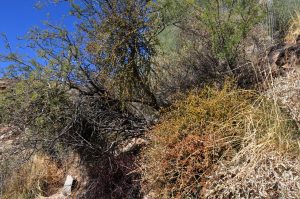 An Acacia with mistletoe in the foreground 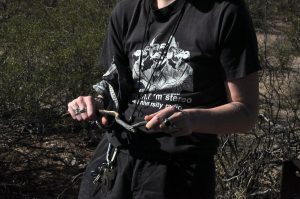 Kelsey with the stick 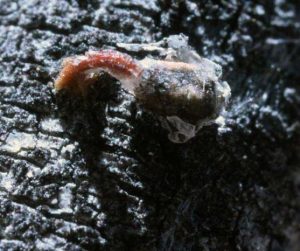 The seed with haustorium on a Mesquite branch 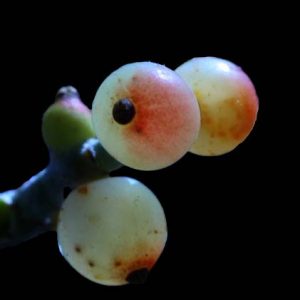 Our home was enlivened by the advent of granddaughter, Gillian, her husband Dave, and 3-year old Mae, and 9-month old Siena. As part of their time here we went to Agua Caliente Park in Tucson. The first thing that caught Dave’s eye was a thin snake curled up on the path, surrounding a little whitish ball of fur. It was eating a mouse, and we were able to watch until it was just a fat lump in its slim body. Later we went to the butterfly garden where the white milkweed flowers were being visited by about a dozen Queen butterflies. Mae was thrilled to touch one of them. 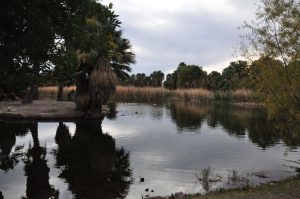 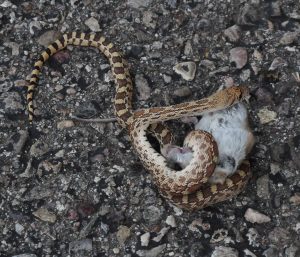 The snake holding a mouse 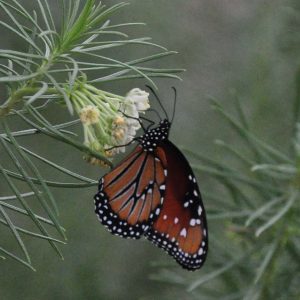 The Queen butterfly on a milkweed flower 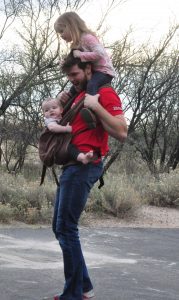 Dave with Mae and Siena 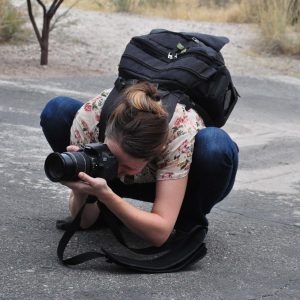 Gillian getting down to serious photography

It is November, and there are not many flowers, but the Desert Mistletoe plants are full of fruit, much to the delight of birds and other animal life.

Dave and I were exploring Bear Canyon in the Catalina Mountains. The stream was intermittent, with long stretches of dry sand, and occasional pools. When we got to the area pictured here, we sat down to relax and talk. The pool was about 10 by 20 feet, and a foot or two deep. We were on the north side of the water, so ripples in the surface sparkled in the sunlight. 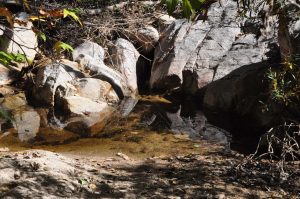 Then we noticed what looked like a cluster of four stars moving erratically across the water. Looking through our binoculars we saw that each star was an indentation in the water caused by the legs of a water strider. We also noticed that the two front legs are very much smaller than the side ones, and created smaller stars, so there were six in all. (Gerridae are a family of insects in the order Hemiptera, commonly known as water striders, water bugs, pond skaters, water skippers, or jesus bugs. Wikipedia) 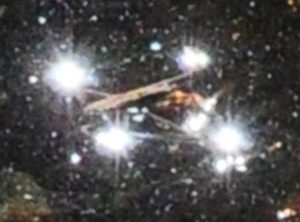 An enlarged picture of the water strider

It was somewhat hypnotizing watching these insects dart around the pond. We imagined that this might be their whole world. In addition to skimming the top of the water, they occasionally jumped, doing so quickly enough for us to wonder where they had gone.

Then a white moth (or butterfly), landed on the pond, at first lying quite still. The water striders started to gather around, and looked as if they were going to feast on this delectable corpse, when, all of a sudden it started flapping its wings furiously. The encircling mob immediately retreated. We were fascinated by the sun reflecting off the ripples, and the shadows of the ripples making fast moving circular patterns on the bottom. 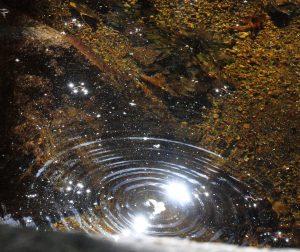 There seem to be about six striders in this view

After a few seconds of furious motion, the moth lay perfectly still. The striders cautiously started to move in, only to be panicked by another flurry of wing activity. We noticed that the beating wings did not leave the surface of the water. They were more like paddles on a row boat. 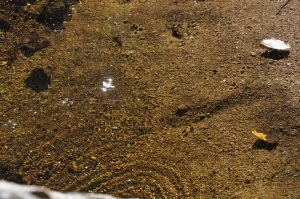 In addition to the striders a couple of dragon flies came into the area right above the water, darting back and forth and then disappearing upstream. We were amazed at how they managed to avoid a spider’s web that hung in the still air.

The drama with the striders and the dying moth continued, and we left the area long before it was finished. We felt privileged to share their world, if only briefly.

BOOK SIGNING
This coming Sunday, November 6, I will have a book signing at our church – Sunrise Chapel.
The chapel is on 8421 E. Wrightstown Road, between Pantano and Camino Seco, in Tucson. The signing will be on the Patio from 12:15 to 1 pm. I will have these three books: “Bo and the Fly-Away Kite (written by Virginia Ames and illustrated by me), “Church Growth Pains and Pleasures” and “More Wildflowers and Trees” containing photographs of 343 plants thast did not make it into my other books: “Mountain Wildflowers” and Mountain Trees” which will also be on sale. Notecards of my wildflower portraits will be available. I would love to see you there. 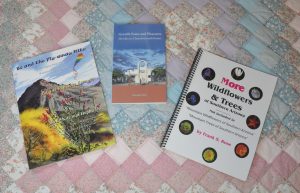