Steve and I were walking along Oracle Ridge. A fairly steady wind was whistling through the bare trunks of ponderosa pines which were burned in the fire twelve years ago. As we looked up we could see ravens circling around, playing with the wind and with each other. At first there were just a few. After a while I counted twenty-four, and knew there could have been more. When I finally woke up to the possibility that this would be worth photographing, one of the ravens had settled on the top of a burned out tree, and a few others were near. Soon the dance was over, and the sky empty. What a treat! 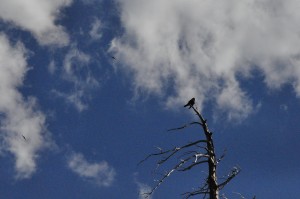 Ed and I were making our way up Turkey Run and stopped, as we always do, to see if the rare and beautiful Shooting star flowers were in bloom. I took out my binoculars and thought I saw one lone blossom up the hill and to the right. Ed looked and questioned my perception. He said it was just a patch of sunlight on a leaf. The hill is very steep and wet. I had to scramble up and see for myself. I got near enough to the clump of foliage on the right to know that Ed was correct. Then I looked left and saw more than twenty Shooting star plants, all of them in bud and three with open flowers. 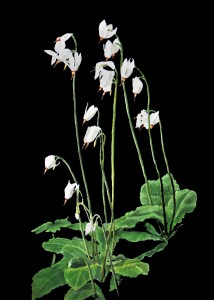 Watercolor of a flower and a bud

Years ago when I first saw these plants I got some good photographs and was able to do watercolor portrait of a group of plants, and a close-up painting of a single flower.

We were taking a plant walk in Marshall Gulch. Anne called me to look at a cluster of Coral root orchids. There were four in a little group. I managed to get a picture of what I thought was one plant, but turned out to be two. This is possibly the most densely flowered of these orchids I

Spotted Coral Root orchids (Corallorhiza maculata) The one with the black background is actually two plants. Note the penny for scale. 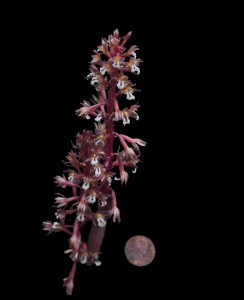 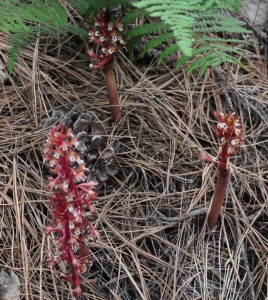 Coming down the mountain I stopped to see if the rare and somewhat obscure Catalina beardtongue (Penstemon discolor) was in bloom. I found them where I had expected to see them, and noticed that a few of the plants in bloom. I had my close-up camera with me so could get a really nice picture of one of these beautiful flowers. 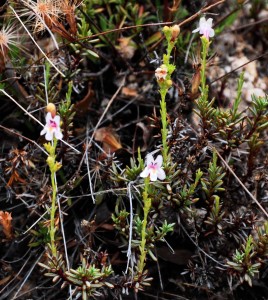 These plants are about six inches tall.

An individual flower close up