Driving up the mountain road, you pass mile-post 15, and soon come to a point where the road turns away from the view you have been enjoying for several miles. You are now in an Oak-Pine woodland at almost 7000 feet. The ground is a tumble of boulders, some in quite fantastic shapes. And on these boulders, seemingly growing right out of the rock surface, are these delightful little plants. On a recent hike in the mountains we came to an area with dozens of them scattered over a fairly wide area, almost all of them growing in some kind of rock crevice. Many were in bloom, though the flowers were few and far between. The plant is called: Catalina Beardtongue (Penstemon discolor), and is only found in one state in the Union – Arizona. The color ranges from a very pale blue, almost white, to a much deeper hue. The flower stalks are only a few inches high. And they certainly have a very remarkable beard on their tongue. 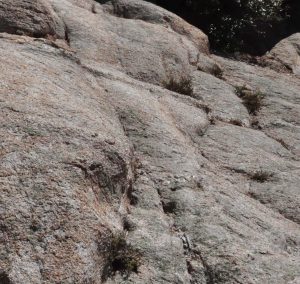 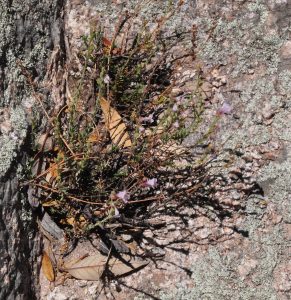 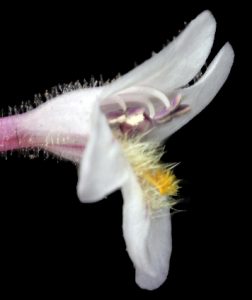 There was a lot of road reconstruction during the rebuilding of the Hitchcock Highway up the Catalina Mountains north of Tucson from 1988 to 2005. The road goes right through this area, which is the only part of the range where I have seen this flower. We were worried as to whether it would survive. The fact is, the plant is doing extremely well, surviving on rock surfaces with practically no soil, and in a part of the year with very little rain. Through all of that, this gem of a flower keeps its beauty.

I have been hiking the Catalina mountains for thirty-six years. Most of the hikes for the first seventeen were done as a means of covering the ground fairly rapidly, with occasional stops to take a landscape photograph. That all changed in 1999, when I started taking pictures of flowers too. This has meant traveling much more slowly, and has rewarded me with a growing enjoyment of plants. Seven years ago I wrote a guide to the mountain wildflowers in this part of Arizona. Since then, I occasionally come across one I have never met before, and that is always a treat, though a little discouraging since it is too late to include it in the book.

My son, Owen, and I are putting finishing touches on a new book, Small Wonders, which includes many plants that did not make it into the first flower book, some because they seemed too insignificant, others because I had not met them yet. Just recently I met a new one, too late for the book in progress. Ah well, the beauty of this kind of search is that you never come to the point where you have seen it all.

After three and a half months with no rain here, we had a downpour on Saturday, June 16. This was the day when our son, Alan, and I had planned to go up into the mountains so that I could photograph a flower that had not been recorded in this mountain range for over a hundred years. We saw it on our plant walk about a week ago, but I did not have my close-up camera to get a good picture. Besides the flower buds were not yet open.

In just a few hours two and a half inches of rain drenched our property, and obscured our view of the mountains. We almost gave up hope of going up the mountain that day. And then, in the middle of the afternoon, we saw our chance. We drove up to Turkey Run, walked the trail under a clear and cool sky, and I got the pictures shown below.

This is a member of the Ericaceae – the  Heather Family. It is related to Pyrola, and when I first saw it I thought it was Pyrola elliptica. We noticed it growing in a bed of moss. Its name, Sidebells, describes the fact that the flowers are all on one side of the stalk. This is also the meaning of the botanical name, Orthilia secunda. 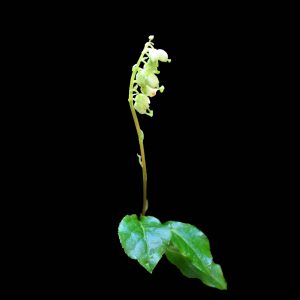 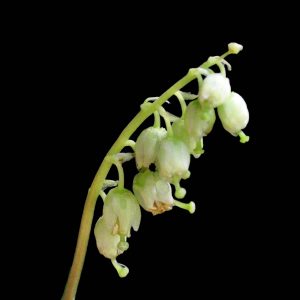 The plant on the right is Pyrola Elliptica, which has flowers all around the stalk.

I grew up in suburban Philadelphia. and remember hearing references to Arbutus, a city in Maryland, north of Washington DC. In learning the plants of southern Arizona I was pleased to find that this is the botanical name of a very beautiful tree. The common name is Madrone (from a Spanish word meaning “Strawberry Tree”. It is a member of the Heather family (Ericaceae). Botanists call the species in this area, Arbutus arizonica. Recently hiking at 7000 feet, Steve and I saw one with a very wide, blackened trunk. I have read that it can grow for over two hundred years, and this one seemed to fit with that time line having been severely burnt at some time in its life, but still flourishing. 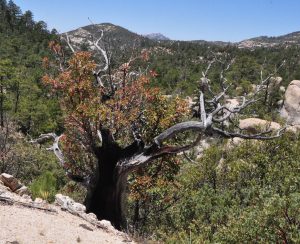 As an evergreen it keeps its leaves all year, but in June a significant number turn a beautiful red, as in this picture. This makes it easy to spot driving up the mountain.

The ones we saw at the end of May had white flowers, like little bottles. The bark is also red. In a few weeks it will support a full crop of beautiful red berries. 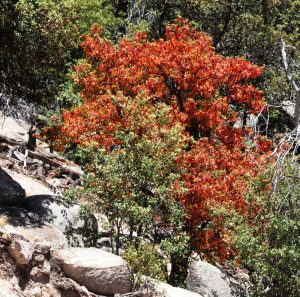 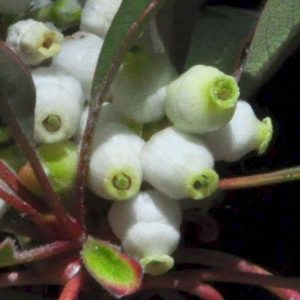