Looking ahead to a summer vacation Louise and I decided to visit Greer – a small town in the White Mountains of Arizona. The Little Colorado River runs through Greer, eventually ending up at the Grand Canyon. There it is just a stream, bordered with a wealth of flowers, many of them new to me.

As we were leaving Greer Louise and I decided to walk the Butler Nature Trail. It is a short walk, just about a mile long. For the first half mile it climbs up to a spring where we were able to fill our water bottles. I noticed on the walk that even though I walked slowly, finding the up-hill slope a bit of a challenge, Louise was walking even more slowly behind me. From time to time I would stop to rest as she caught up with me. When we were at the Spring she made a watershed statement. “This is my last hike. I am almost 87 years old and it is just getting too hard for me.” I admit to being a little stunned, but also pleased to have her make what must have been a difficult decision.

When we moved to Arizona in 1982, we were not hikers. This is something we came to do and love over the many years since then. We have walked hundreds of miles together, enjoying some of the most beautiful scenery in the world. It has been one of the most satisfying and worthwhile forms of exercise we have ever had. For me it has also been a great opportunity to take pictures of scenery for painting watercolors, and of plants for my nature books.

In 2000, Louise and her sister Ann, decided they would like to hike the Grand Canyon rim to rim in one day! I thought it was a daunting challenge and one I was willing to support. Louise and I began training for the big walk, including climbing Mount Wrightson, walking down to Tucson from Mt. Lemmon (about 15 miles), taking long hikes in the Rincon Mountains, and generally doing all we could do to condition ourselves for the big event. Louise bought new boots three months before, to make sure they were well worn in before the big hike.

On October 2, 2001, when Louise was 72 and I had just turned 74, we accomplished the dream. There were 8 people in our party, plus Louise’s brother Jim and sister Fran who provided transportation. Our youngest son, Owen, was also with us. We began the hike at 6 am in the ice at the North Rim of the Grand canyon, and Louise and I were the last to arrived at the South Rim 17 hours later. We had no sore muscles or blisters after that twenty-four mile walk.

In the years since then we have enjoyed many more hikes. But this one-mile hike in Greer was to be the last one. We paused to reflect on this change in our lives, and then continued the walk down hill back to the car. Somewhere along the way Louise called to me – “Look at this!” I turned around and saw her pointing to her left hiking boot, with the sole flapping down like some prehistoric jaw. I reassured her that she could still walk on the boot, since it was ruined anyway. In only about 15 minutes we were back at the car. When she took off her boots she noticed that the right boot was also losing its sole, but this one was peeling off from the back, not the front.

We could not help remarking on the proximity of the two events – the announcement that this was her last hike, and the boots giving out. “They must have heard me” was all she said. They had given her fifteen years of amazing and faithful service. As she put them in the trunk she felt a mixture of relief and sadness. A truly wonderful era in our life was coming to an end. . 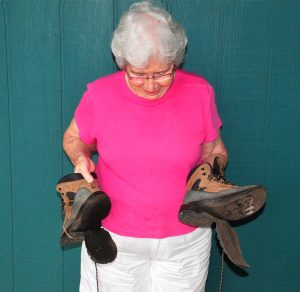 We have been going on plant walks every week since June, and every week we see fewer flower species in bloom than usual. The last rain here was April 11 – just under eleven weeks ago. What a thrill today when the heavens opened and almost an inch of rain was recorded in our rain gauge! In a few hours the temperature dropped thirty degrees.

There are some wildflowers in bloom, including three that I have never noticed before. One of them had been on Joan Tedford’s plant list for years, but I have never seen it. Perhaps this is because it has leaves that look very much like the walnut trees which grow in the same area (about 6000 feet in elevation.) When I saw the leaves I thought it was just another walnut tree, but then I looked at the flower cluster and knew that this was a plant I had never noticed in the mountains. I could have seen it in other places in America since apparently it is the only tree or shrub that can be found in all of the lower 48 States.  It is called Smooth Sumac (Rhus glabra).   I look forward to seeing the red berries, and its brilliant red leaves in the autumn. 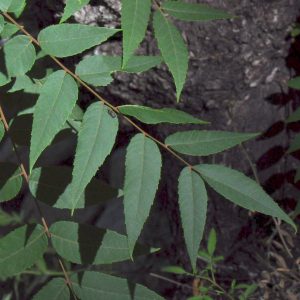 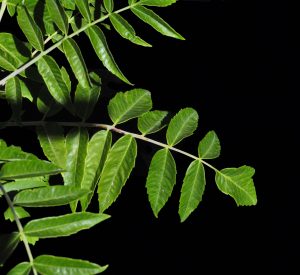 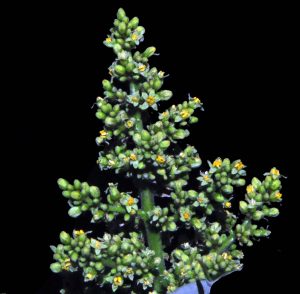 Another new plant – not yet identified – looks like a lactuca, but it seems to be one that I have never seen before. The third new plant is a Galium. I am waiting to photograph it when it starts to bloom in a week or so. 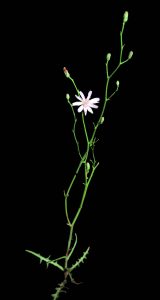 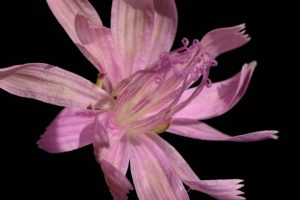 On Father’s Day (June 19) the Arizona Daily Star had a two-page article titled “Art Strengthens Family Ties – Father, son share love for creating watercolors.” This excellent article was written by  Angela Pittenger and features our son, Owen, and me plus pictures of our paintings. I have had many very positive responses to the article. 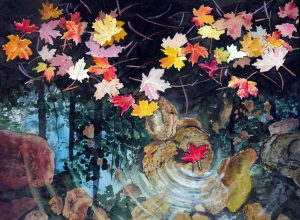 “Fall Leaves” – One of the paintings in the article:

We are all excited about the rain that fell today, and hope for more rain in the coming weeks. This should bring out many more of the wildflowers that I love so much.

Ed and I were walking along the Sunset Trail in the Catalina Mountains, and my eyes were drawn to these Douglas Fir trees. I have seen one-sided trees like this on high mountain ridges where the prevailing winds fashion them into a flag shape, but we were in a canyon about a thousand feet down from the highest poInt in the range, and these were the only two with this particular shape. I suspect that the wind at times can come roaring up the canyon from the right in this photograph. And then again, there may be another explanation for this unusual shape (called Krummholz or Flag trees). 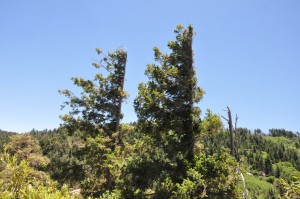 Now it is June and the Cow Parsnip plants are huge and showy. Their botanical name, Heracleum lanatum, means Woolly Hercules, the giant of Greek mythology (Heracles in Greek, Hercules in Latin). This plant is in the carrot family and can be as high as six feet tall with large leaves and inflorescences. Using my close-up camera I was able to photograph an individual flower from one of the many clusters that make up the entire flowering head. I notice that these little flowers tend to be lopsided, with small petals facing to the center of the cluster,, and larger ones facing the outside. 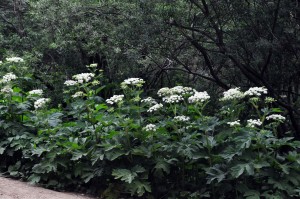 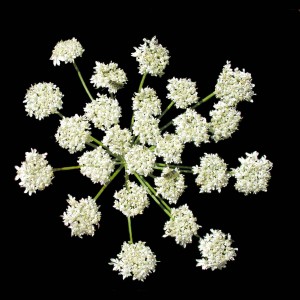 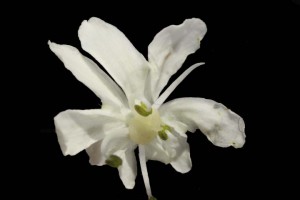 It has been very dry and hot (many days over 100 in the valley), but the Coral Bells (Heuchera sanguinea) are flourishing and are a treat to see. 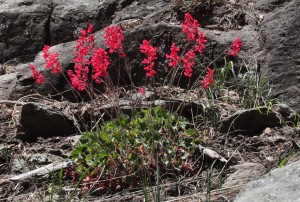