The eastern part of the Santa Catalina mountains near Tucson has had over 14 inches of rain since the beginning of June. This is perfect weather for the many fungi that grow in the forest. Today we came across quite a few of them, the most spectacular being this shelf fungus – extending from the base of the tree as many as 8 inches. I have read that som 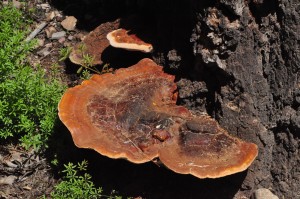 e shelf fungus are edible, and I wonder if this is one of them.

A week ago we saw a beautiful ink cap fungus (Coprinopsis atramentaria), one that is definitely edible but is dangerous if mixed with alcohol. I have observed how these beauties, as they age, simply melt into an inky-black pool. 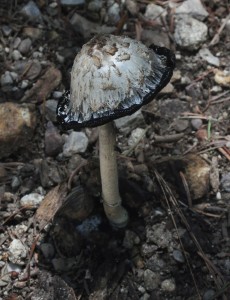 On one of my hikes I noticed a rock about 5 inches across. Taking a closer look I realized that it was being lifted off the ground by a mushroom! 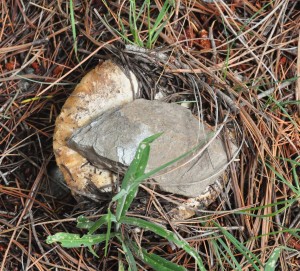 NATURE NOTES
Today my buddy Ed and I went up the mountain. We thought we would stop briefly at Molino Canyon Overlook to see the flowers on the Limberbush. We found the flowers all right, but then felt drawn to go upstream in search of the Melon Loco. (Apodanthera undulata) We found many plants, some covering large areas. They had lots of bright yellow flowers, but no mature fruit.

We couldn’t help noticing that the ground was carpeted with seedlings, mostly morning glories. So far none were in bloom, but we could picture them, some with large blue flowers, and others with small red ones. It would soon make this into a glorious garden. We were puzzled by another plant, but soon realized it was the largest of the four o’clock family on the mountain, the Sweet Four O clock (Mirabilis longiflora). There were just a few drooping flowers, that had been open since last evening. If we want to see them in bloom we have to come back after five in the afternoon, or in the early morning. The flowers have trumpets that are up to four inches long – bright white with some red in the throat. 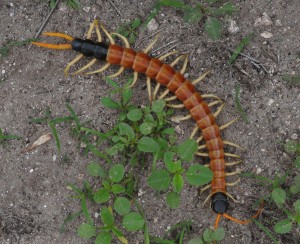 Walking along the path we were startled by what at first seemed to be a small snake. It was a giant centipede, about 8 inches long, with yellow feet, an orange-brown body, orange feelers and black head and rump. It moved very quickly across the path, but not too quick for my trusty camera. Its scientific name is Scolopendra heros, In a side drainage we saw a coral bean in bloom – very late for this plant, which usually blooms in June. Farther up the mountain I went to see if the gorgeous Rusby’s Primrose (Primula rusbyi)  was blooming. After less than ten minutes climbing the hill, we found more than a hundred plants giving a wonderful show. What a treat No sooner had we returned to the car to descend the mountain than the rains came.