September 23, 2013
On Saturday, September 21, I had the pleasure of speaking at the beautiful Western National Parks Association facility in Oro Valley. I gave the lecture twice – at noon and again at 2 pm. I estimate the total attendance at the two talks was close to a hundred people.

In the lecture I mentioned the young scientist, William Gambel. My facts were not all correct, so I decided to get better information. This is what I learned about this remarkable young man.

He was born in June of 1823, over 190 years ago, near Philadelphia. When he was 15, he was taken under the wing of the famous British ornithologist and naturalist, Thomas Nuttall (1786-1859), who was thirty-seven years older than he was.  Together they traveled the east coast of the United States from North Carolina to Maine. From 1841 to 1843 Gambel traveled to the west, especially New Mexico and California, doing nature research. By 1845 he was back in Philadelphia where he obtained a degree and became a doctor of medicine. He also married. He and his wife left Philadelphia in April of 1849, traveled to California, going over the mountain passes of the Sierras late in the year. This was just after the beginning of the great California gold rush. He caught Typhoid and died on December the 13th, not yet 27 years old. (He did not die in a gambling fight, as I thought I once heard.)

He had made quite a mark in the scientific world, and now has the Gambel oak, Gambel’s quail, the mountain chickadee and a lizard named after him. The oak is the only one in southern Arizona that has a fall color display.   Here is a picture of the oak on Incinerator ridge in the Catalina Mountains. 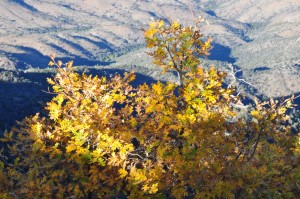