A few days ago we had some good rain in Arizona. The  gauge at our house registered almost two inches. Since our annual rainfall is just under eleven inches, that was quite an event. When Ed and I went hiking today in Saguaro National Park East, we could see large areas of damp earth but no running water.

For the first two hours of the hike we saw no flowers in bloom at all. The Zinnias (Zinnia acerosa) had dried up blooms, as did the Cooper’s paperflower (Psilostrophe cooperi). We especially noticed the Saguaros. This is a plant that needs to spend its early years under the canopy of some other plant, which serves as a nursery plant. We came across a Palo Verde with nine saguaros in its shade (only six show up in this photograph). It is quite a family.

Later, at the top of a cliff we saw a creosote bush with a baby saguaro growing right in the middle. 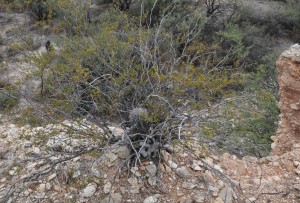 And then we saw one probably forty years old, right along an ocotillo (Fouquieria splendens), which evidently provided enough shade to protect the plant in its infancy. We had never noticed this as a nursery plant before. 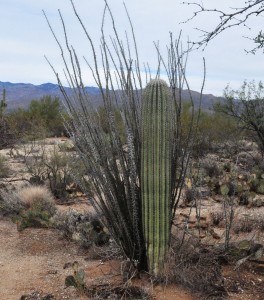 We found a barrel cactus (Ferocactus sp.) that had very recently fallen over. We guessed it was just over five feet tall. These cacti point their heads to the south, toward the sun. When they get above five feet they usually fall over from their own weight. 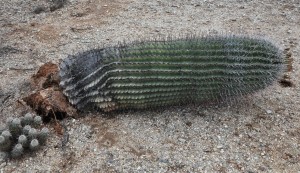 Later we found another that was even taller and was still standing. We thought that this was the tallest barrel cactus we had ever seen. In this picture you can see that it is about the same height as Ed. 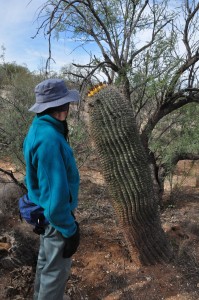 We more or less gave up our search for flowers in bloom, and then came across a Slender goldenweed (Xanthisma gracilis) and later a Trixis plant (Trixis californica) with several blooms. 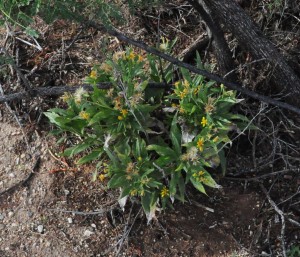 Recently I heard from the Desert Museum that 1,970 copies of “Mountain Wildflowers” had been sold since its first introduction in April 2011. That averages out at selling more than two copies a day for two and a half years, for which I am very grateful. 750 copies of Mountain Trees have been sold since it was published last year.

Wishing you a happy Thanksgiving.

3 replies on “SAGUAROS AND MORE”