It was a cool, cloudy day, so Ed and I decided to stay in the valley for our weekly hike. Something drew us to explore Milagro Canyon. We found many flower species in bloom, some with only a few specimens, others out in full force, like the gorgeous Indigo Bush (Dalea pulchra) loaded with its wine colored flowers. The other was one that I have not seen very often, Arizona water-willow (Justicia candicans) also called Red justicia (which puzzles me since candicans means “white”.) 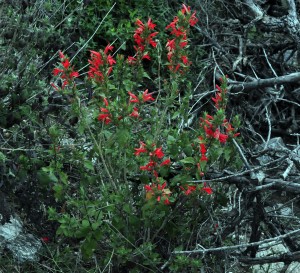 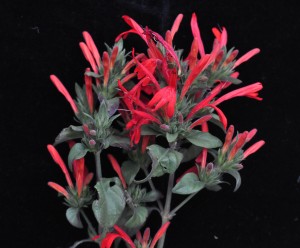 The top of Arizona water-willow with lots of blooms 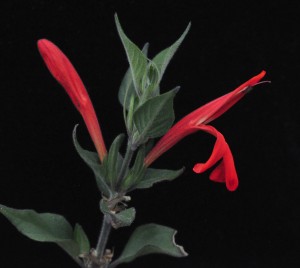 A close up of two flowers

The stream bed was choked with grasses, most of them invasive species, notably these two bad actors – Fountain grass (Pennisetum setaceum) and Buffelgrass (Pennisetum ciliare). Not surprisingly since they are of the same genus, they have similar flowering stalks as shown in this picture. The leaves are very different. Fountain grass has mostly straight leaves that splay out like a fountain. Buffelgrass leaves are wider and more irregular in their growth pattern. Fountain grasses is the dominant species in this canyon and is larger than Buffelgrass. 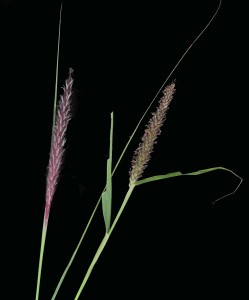 On the left is Fountain Grass with straight leaves

On the right is Buffelgrass with irregular leaves

En route Ed began talking about Ragged rock flower (Crossosoma bigelovii), and very soon we spotted some up on the cliff above us. We wondered if we unconsciously noticed it, discussed it, and then spotted it or whether it was just a coincidence that we saw it almost immediately after discussing it. We love it especially for its beautiful scent. Speaking of scent, we were also delighted with the fragrance coming from some mistletoe. 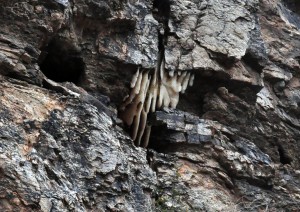 On our way up the rocky canyon, we looked up and saw something like stalactites hanging in a recess in the cliff. Our trusty binoculars revealed that these were honeycombs. Neither of us had ever seen the likes of it. We did not stay to look at it more closely, concerned that the hives might be the work of the infamous killer bees.

We got about as high in the canyon as we wanted to go, and stopped to rest. Sitting down for our break, Ed looked up into the gray sky and saw a glow where the sun was obscured by the clouds. We liked the way this glow was framed by the arms of a saguaro cactus far above us. This was about as much of the sun as we saw all day. 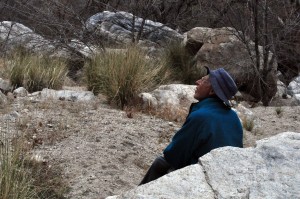 Ed looking up at the gray sky with fountain grass clumps 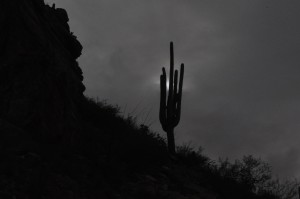 The sun just barely showing through a saguaro cactus

On the return to the car we saw five flower species that we had not noted on the outward journey, making a total of about twenty for the day. Not bad for early February.