The Santa Catalina mountains, like the whole of South Eastern Arizona, are very dry. It has been months since we had significant rain. A group of us hiked on the Oracle Ridge Trail. I did not expect to see any plants in flower, but there were at least seventeen species in bloom, though not in great numbers. Many plants were shriveled up. In a few weeks we should see two or three times as many.

One of our group noticed the twisted branches of a long-dead tree. He had been on the trail recently, and said that he had seen a nest on one of the dead branches a few days ago. We stopped to look, and, with the help of our binoculars, were able to make out a tiny clump of matter which was the nest. We were told that it was a broad-tailed humming bird’s nest. As we studied it, the hummingbird appeared, flew around, and settled in. In the photograph you can make out her silhouette. 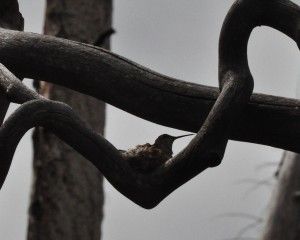 Broad-tailed hummingbird on her nest

We were also told that the magnificent Parry’s agave were in bloom. The ridge is known for being buffeted with high winds. One year I found that almost all of the flower stalks had been broken off. This year there were a number of magnificent blooms. In the picture below you see Amy admiring it. I also include a picture of one of the broken stalks. In it the flowers, which are normally at the top of the stalk, are growing out of the sides. In the bud stage they are bright red, opening to reveal beautiful yellow flowers. 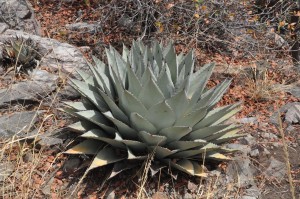 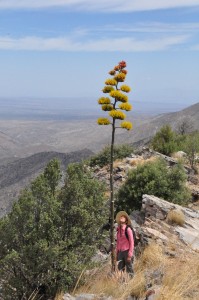 Amy looking up to the agave blossoms 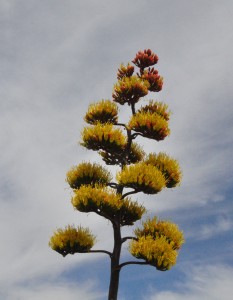 The inflorescence – note the red forms at the top

are the flower buds

An agave broken off by the wind, with new flower buds

On the return journey Amy noticed what seemed to be a large butterfly, in the middle of a plant. It turned out to be a silk moth, possibly Glover’s. 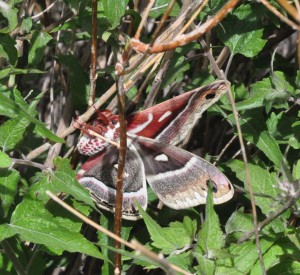 As I drove down the mountains I noticed the storm clouds moving in. By evening time, safe at home, we could hear the thunder and rain. To our great relief, it seems that the drought will soon be broken.