About ten days ago Ed and I hiked in Marshall Gulch, just above 8000 feet in elevation. Though it was toward the end of October there was till plenty of color in the maple leaves. I was particularly fascinated with the way in which the leaves that have fallen into the stream distort the normally flat surface of the water. At the right angle the sun reflects off of these depressions creating the effect of having each leaf rimmed with stars. 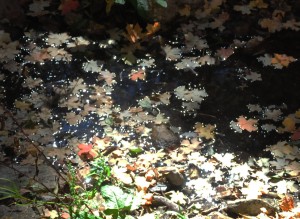 We passed a fallen tree, and noticed that the cut end of the tree was populated with a number of fungi, in a variety of colors. 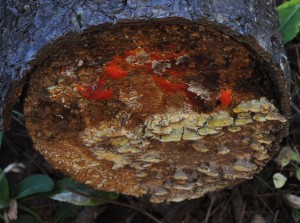 I wonder how many different fungi are on this log

The core of another log had evidently been burned out in one of the mountain fires. We found the overlapping scale effect quite interesting. 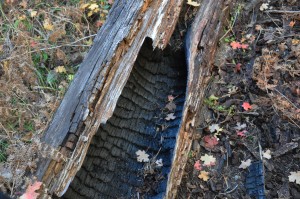 The temperature has finally dropped a little and walking in the desert is comfortable and rewarding. Ed and I had a pleasant amble in Saguaro National Park East this week and saw more than a dozen plant species in bloom. In addition we enjoyed seeing the remarkable nest of the Cactus wren (ampylorhynchus brunneicapillus, State bird of Arizona), in the densely thorned Jumping Cholla (Cylindropuntia Bigelovii). The nest was at least a foot long, shaped like an elongated football, lying horizontal with an opening at the end. 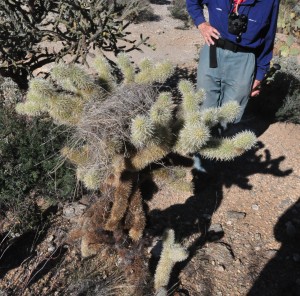 The opening is to the left in this picture

We also found a chain-fruit cholla (Cylindropuntia fulgida), with a beautifully formed nest. Ed suggested it might belong to a curve-billed thrasher (Toxostoma curvirostre). 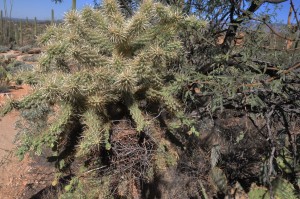 This nest is almost in the center of the plant

A Barrel cactus (Ferocactus wislizenii) normally forms a single round ball, extending to a long cylinder as it grows, with a crown of flowers, and later fruit at the top. We saw one that had an extra layer, possibly a separate barrel cactus growing on top of it, with fruit. 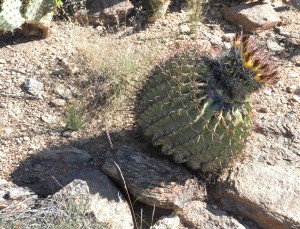 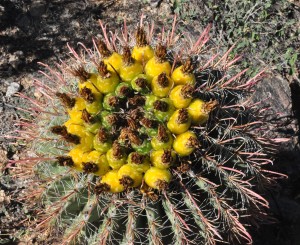 Looking down on the fruit of a normal barrel cactus

Hiking in Molino basin, we came across a Mexican blue oak (Quercus oblongifolia) that had fallen some time ago, and was now being cut up. I found the cross-section fascinating. The heart-wood had rotted out, and left an empty center with star-like channels growing toward the bark. 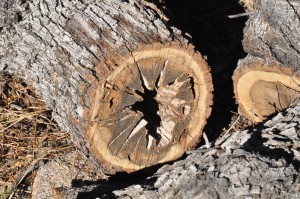 The growing season is slowing down, but there is still a wealth of beauty to enjoy.