GOING FOR THE GOLD
Ed and I were planning our weekly nature hike. It is much cooler in Tucson now that October is almost over, which would suggest a hike in the valley, but we wanted to take one last look at the golden fall colors in Marshall Gulch. We feared that we were too late.

Just before arriving in Summerhaven we noticed a group of four or five wild turkeys, one spreading its gorgeous tail feathers. We were driving at the time and there was no chance to catch a picture of this healthy-looking group. 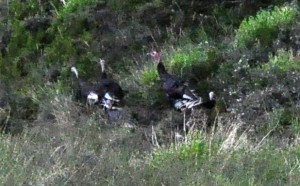 Wild Turkeys from a different trip up the mountain

We parked in the Gulch, and I suggested to Ed that we might see as many as four species in flower. He thought I was being terribly optimistic. After all, this was the last day in October, and temperatures in the mountain drop below freezing at night this time of the year. Four weeks ago, October 2, the fall colors were just getting started in the Gulch and we counted 37 wildflower species in bloom. Today the trees were mostly bare, though we did find many beauties, like the one in this photograph. 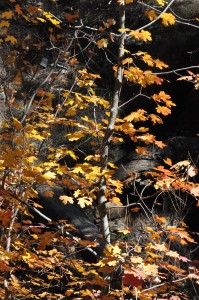 Within the first ten yards on the trail we saw our first flower, Horseweed (Conyza canadensis). Not long after that Bitter Dock (Rumex obtusifolius) with its nearly invisible flowers. For a long while we saw nothing. As we neared our turning-around point, we spotted a rather small paintbrush (Castilleja sp.), and then three healthy looking Arizona fleabanes (Erigeron arizonicus). We had achieved our goal, and now it was time to retrace our steps back to the car.

But first we had a very pleasant encounter with Jasmine, the beautiful donkey shown in this picture, with her friend Leigh Anne who pointed out that just a few days ago a heavy wind storm swept through and tore many of the leaves off of the maple trees. 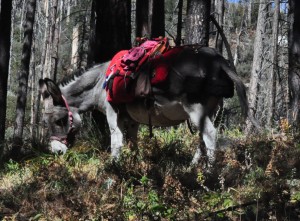 Soon after that we met up with a group of three people, and learned that they were Philip, Ellen and Marie Claude. After an enjoyable conversation, we turned to leave them and almost immediately saw our first “return” flower, a rather scruffy looking Richardson’s geranium (Geranium richardsonii). We announced the finding to our trio of new friends. When Ellen came over to look she asked: “Is it that yellow flower?”  The geranium was white. We looked down, and sure enough there was a flower we hadn’t seen, a MacDougal’s groundsel (Senecio eremophilus). As we continued down the trail Ed and I, almost at the same moment, wondered if this might be one of those hikes where we see more flowers on the return journey than on the outward one. Little did we know. By the time we reached the parking lot we had seen 13 new species, for a grand total of 17 in all. We had seen more than three times as many flowers on the second half of the hike as on the first! And some of them, like the Palmer’s lupine, were in splendid condition.
What a wonderful time we had feasting our eyes on the remains of the fall colors, catching glimpses of all those wildflowers, and enjoying the company of such interesting people on the trail. We found our gold.