It has been almost a month since my last posting. Not being able to include pictures has been a deterrent to making new entries. Our son, Owen, has solved the problem, for which I thank him. 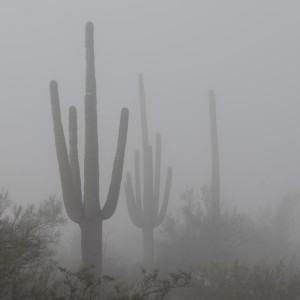 This is one of Owen’s great photographs

In the last week or so we have had a lot of rain – about three inches in three days at our house. Considering that this area receives only a little over ten inches a year, that is a lot. And more is on the way. This leads us to expect a spectacular show of spring flowers.

Recently Ed and I were invited by our friends Doug and Arlene, to see the birds in the nature preserve known as Whitewater Draw in Sulphur Springs Valley, near the border with Mexico. The preserve is one of a number of locations for the Sandhill Crane. It has several very large ponds, full of all kinds of water fowl and other birds. Doug and Arlene, both keen birders, pointed out a number of them: Great Horned Owl, Shovelers, Pintails, Coots, Ruddy ducks, Green winged teal, to name but a few. We arrived late morning.  It was a beautiful overcast day, with grey clouds reflected in the water. This part of the valley is flat, and is ringed with mountains ranges. I thought, “This is a watercolor day.” When we got home I did a little sketch which I will later develop into a painting. 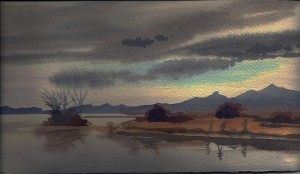 A 5 by 9 inch watercolor sketch

We saw only a few cranes in the morning, but were treated to a large flock of Snow geese, which circled, finally landing in the water only to take off later, circle, and then land again. It was a wonderful sight, especially when the sun caught their brilliant white color.

We went to the old mining town of Bisbee and returned after lunch. As soon as we got out of the car we could hear flocks of sandhill cranes, in raucous conversation. They came swooping in, some landing on the ground, others waterskiing up to the shore. Later more flocks arrived. Had we stayed until dark, we might have seen as many as ten thousand of them. What a treat! The flocks stay here until the middle or end of February when they will migrate north for the summer, some going as far as northern Canada and Alaska. 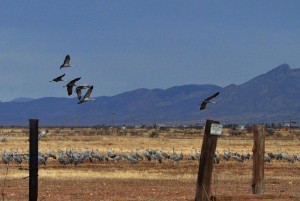 A flock on the ground, and a half a dozen coming to join them

In my last posting I mentioned seeing a number of Jack rabbits on a couple of our hikes. Here are some pictures. 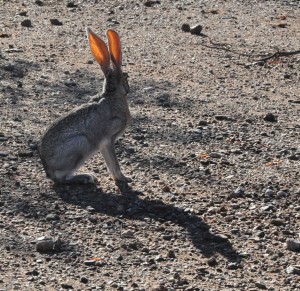 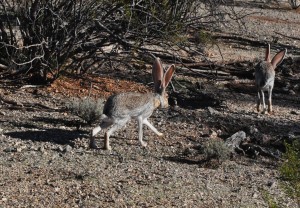 Sometimes they run rather than hop 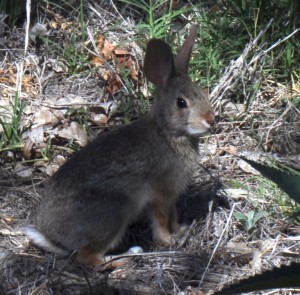 And this is a rabbit

In a few weeks, we will see the desert in bloom!