The Christmas rush is over. Ed and I found beautiful quiet in the Agua Verde Creek, just below Colossal Cave Park near Tucson, Arizona. The temperature was in the high sixties.

As we made our way down the wash we came to some very old tree trunks in fantastic shapes. We started making guesses as to what they were, and eventually decided that they had to be Velvet Ash (Fraxinus pennsylvanica subsp. velutina). We had not seen such thick trunks on the Ash trees we have come upon in the Catalina mountains. In some cases there were multiple trunks – perhaps originally three trees that somehow merged into one. 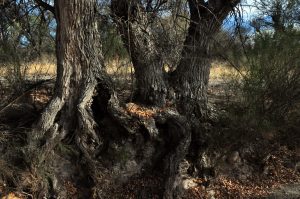 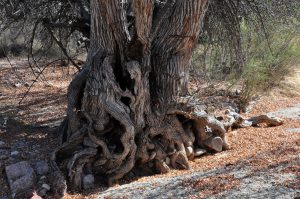 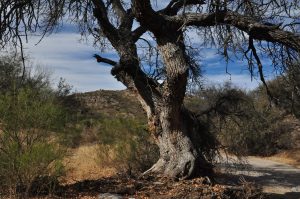 One Cottonwood (Populus fremontii) had a very long root running along the wash. The root, or whatever it is, was almost as long as the tree is high. Ed is trying to figure that out. 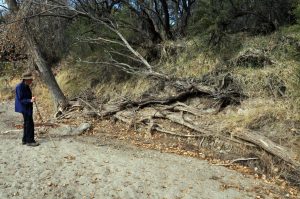 To the north we could see Rincon peak (8482 feet at the top). The sky was filled with whimsical clouds called mares tails. 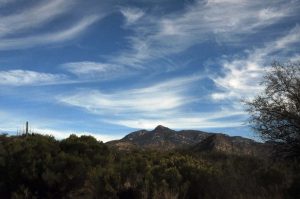 There were no wildflowers in bloom, but we had fun trying to identify plants that had dried up. Cocklebur, desert cotton, prickly poppy to mention a few.

We had over a half an inch of rain eleven days ago, but only a total of about a third of an inch more since the third week of August, so we were surprised to see whole stretches of very damp sand in the wash and even two little ponds. We need winter rains to ensure a wildflower show in the Spring.